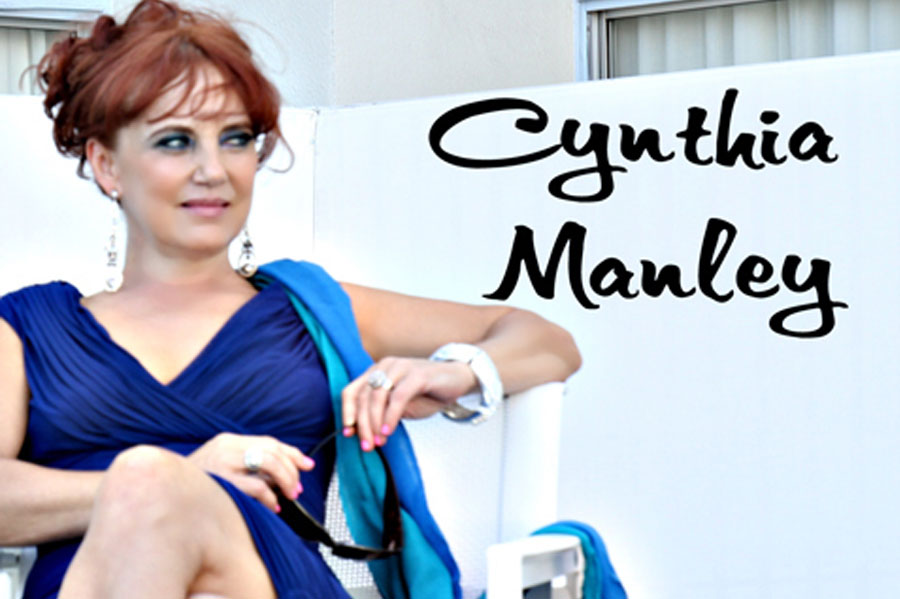 Los Angeles USA
In 1982, Cynthia Manley hit the dance music community like a lightning bolt. With the support of Bill Motley’s productions, Moby Dick Record's ground breaking marketing concepts , and surrounded by the Boys Town Gang, she helped to re-vitalize a whole genre of music. This team warranted Cynthia 4 top 10 BILLBOARD dance hits, including the #1 classic hit “Ain't No Mountain High Enough”, between 1981 and 1986, when Bill Motley passed.
Cynthia is a touring artist and keeps a very busy performance schedule, sometimes as many as 300 shows in 365 days, tearing up stages with her unique combination of DIVA style, Rock'n'Roll spirit ,and passionate vocals.

In 1987, Cynthia joined Voss Records and the Flamingo Orkestra band on a Tito Jackson production of STAND. This song, charted on Billboard’s Hot 100 pop chart and the video was played around the world on VH1.

By 1990, the digital age was upon us and Cynthia anticipated the trend of "Do It Yourself" CD's. She has written and co-produced four CD's, including a Christmas CD. Among these compositions, four songs have been placed in movies .

One of the songs, “Everybody Dance”, caught the attention of Scott Kessler who produced a video to this song, which Cynthia had composed with a talented team, united by Christian deWalden in 2004, in Fiuggi, Italy. They wrote 10 songs and produced 4. The video caught the ear of the M.S. for the movie HEELS. In early 2010, that deal was sealed and Everybody Dance became part of that soundtrack.

She went theatrical when she played Janis Joplan, in a one woman play, filled with songs throughout. This project, written and produced by Will Manus, was a critical and financial success.

As a back ground singer, Cynthia is the “contractor” (she assembles the teams) for the BABES OF BLUES. In this capacity, she has added her voice to innumerable recordings and 15 internationally recognized blues records (details on website)

In April of 2009, Cynthia met Jamie Lewis, while performing in Zurich, Switzerland. They “clicked” and decided to write and produce a record together. She went back to Switzerland in September 2009 , when they recorded the master. Their composition “GIVE” is an uplifting, inspiring dance song, reflecting the knowledge and experience of this gifted team. Cynthia was one of a very few artists invited to perform at the 2010 WINTER MUSIC CONFERENCE, in Miami, Fa., where she and Jamie introduced their baby to the DANCE MUSIC world. GIVE is being released to the public on PURPLE MUSIC.

Cynthia has supported an exciting life as an entertainer since she was 17. She has performed in a variety of venues such as: “5 star” hotels in foreign lands like Muscat, Oman and Beijing, China; military tours in war zones like Baghdad, Bosnia, Kosovo and Iraq; 2 tours of Japan, 4 European tours, and 3 tours of Brazil. On her first six city tour in Brazil, Cynthia opened for Gloria Gaynor & loved it! When she isn’t touring , promoting her dance records, Cynthia performs in bars and festivals in the Greater Los Angeles area where she works with her old school R&B/Blues band. You can count on Cynthia to give 100% and she has always proclaimed that the “live” performances are why she’s in the business!

One thing is sure, Cynthia will NEVER QUIT. She is a tireless force of nature. Her live performances glow with the love she feels for people and her art form. If you want to be entertained, find Cynthia somewhere in the world, spreading her own brand of love, and ENJOY!